Meet the experienced and friendly doctor and staff who make Ardmore Eye Care the leading provider of vision care products and services in Ardmore. 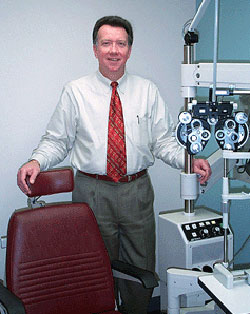 Dr. Hall is in private general practice at 11 W. Lancaster Avenue, Ardmore, PA. This practice was first established in 1951; Dr. Hall took over ownership in 1989. Dr. Hall has an extensive background in ocular disease, contact lenses and optics.

Dr. Hall graduated from St. Joseph’s University in 1980 with a B.S. in biology. He received his Doctor of Optometry degree in 1985 from the Pennsylvania College of Optometry. In 1986 he completed the competitive residency program in primary care at The Eye Institute in Philadelphia. Dr. Hall’s first experience with the field was as an optician in the U.S. Army in 1971-73 at the Fort Sam Houston Army Medical Center, San Antonio, Texas.

In his community, Dr. Hall is active in the Rotary Club of Ardmore, where he has chaired several committees and is a member of the District Rotary World Community Service Committee. He is also a member of the Ardmore Business Association and the Main Line Chamber of Commerce.

Dr. Hall is an avid golfer, has an intense interest in the science of cooking (he makes some of the best southwestern chili you have ever had), and reads with a passion.

Dr. Hall and his staff members, Dana, Kelly, Maria, Jackie and Amelia, are committed to providing the highest quality eye care and vision services available. They are constantly evaluating new and interesting ways to better service their patients.

You can schedule your next appointment with us online!